(picture: front entance to the monastery)

Anagarika Giovanni has been refining his already considerable carpentry skills as he repairs the gable at Kusala House. From the outside all had appeared solid and stable, but inside it was quite rotten. Our kind and helpful groundsman, Nick Pearce, has repaired the guttering above the front entrance sign. Kevin Vallely's crew have rebuilt Luang Por's shower during his time away. Once more despite outer appearances, behind the paneling there was significant deterioration. Behind the bench in the Dhamma Hall conservatory we discovered a crop of fungus growing. That too has now been tidied up. The possibility of purchasing part of the block of neighbouring land that is up for sale has been dropped. More might appear merrier, but the reality can be that cultivating contentment with what we've got is merrier still. Anagarika Martin's family have returned to France happy after a rewarding week of getting to know the monastery. Our Kitchen Manager, Anthony, has gone away for a week, to France. Ajahn Abhinando is about to go away for a few days, to Leeds. Last Sunday he offered a guided meditation about finding a Natural Peace within the changing appearances of life. 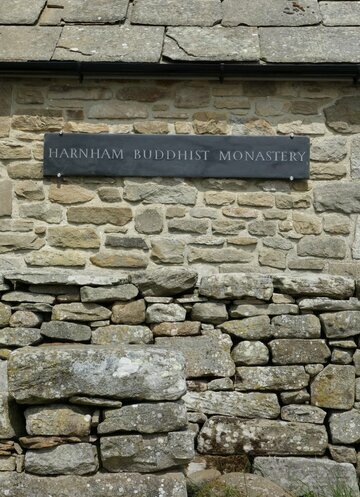