It's September which means the swallows and house martins will soon be leaving; for now the swans seem happy to stay where they are. September also means it's the abbot's birthday, and to celebrate, today the new forestsangha.org website has gone live. Anumodana to Kris Quigley who invested huge amounts of time and energy helping Luang Por get the site built, and up and running. Also today, a delivery is expected of two pallet-loads of Dhamma books from the Kataññuta Publishing Group in Malaysia. Last Sunday Koko, Nang and Rose delivered the recently re-gilded finial for the stupa and it's now been successfully re-installed. Tomorrow Ajahn Abhinando is expected to depart for Romania to lead a meditation retreat. On Sunday, when he led the Practice and Study Day here at Harnham, the group only got as far as the first half of the theme  - Samadhi - leaving the second half - the Brahmaviharas - for a later occasion. The countryside is quietening down. The harvest is in. The days are still long, but getting shorter. We have already started lighting the fire in the Main House. This year our resident sangha of bhikkhus was not large enough to permit a formal Kathina Offering, never-the-less local supporters are organizing a Pah Bah almsgiving for 1st November. Anyone who would like to be involved could contact Bee Wan Ling (07912 683576), or Mame Goodchild (07855 902226). 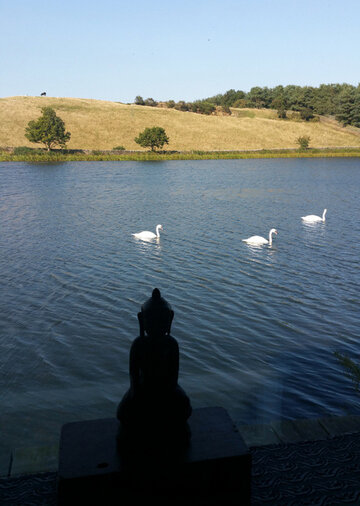