Ready for the Winter

(picture: Aj Abhinando attending to gas supplies at the kutis)

On Sunday evening at puja Ajahn Abhinando offered a short reflection on Mindfulness of Breathing. Yesterday, Tuesday 27th October, was the end of our Rains Retreat (vassa) for 2015 and the self-imposed limitations on travel which we observe during the retreat, have been lifted. Now it is open season for visiting sangha members. You probably already know that next Sunday, 1st November, is to be our annual Kathina-season Alms-giving. Many of the senior sangha from our monasteries around Europe will be here at Harnham, adding their voice to the chanting and their anumodana to the goodness of the occasion. On the following Tuesday/Wednesday some of this same group will be participating in a bi-annual Elders Council Meeting. Typical of the type of topics which could be discussed: should we agree to starting more monasteries or do we have enough already; how do we skilfully steward the proliferation of publications, paper and electronic; ought the monastery Trust bodies accept funds raised via lottery. Going by the records of earlier meetings, it seems that though issues sometimes are complex, the community has enough skills to deal with them. This is November so some serious winter weather might be not far away. Thanks to many beautiful gestures of kindness we feel ready for it. 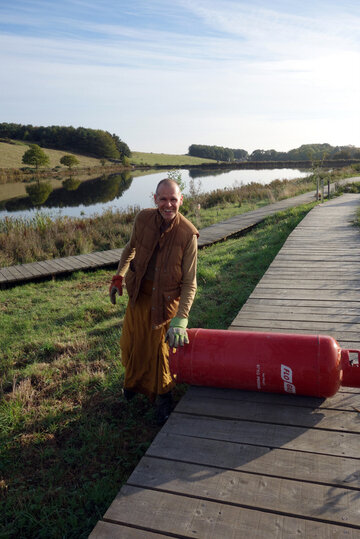