Twelve ardent meditators attended Ajahn Kalyano's retreat; our good friend Cesare-from-Milano came to visit (after a long absence); Ajahn Abhinando traveled away to the meditation groups in Edinburgh and Glasgow and the Kusala House Waste Water system crashed. The sun shone, the rain fell, we've had warmth and we've had cold. Thankfully Dhamma is our refuge and not the reliability of conditions. Reports suggest though that retreatants survived the inconveniences unscathed, possibly even learnt from them. Repairing the sewerage system might be another matter and likely an expensive one. During the evening puja on Sunday Ajahn Abhinando offered a guided meditation on mindfulness of breathing. Luang Por Khampong from Wat Pah Pong has been with us. Luang Por Khemadhammo popped in last week en route back from a Prison Chaplaincy meeting in Edinburgh. And as mentioned last week, Luang Por Munindo is about to depart or a few days of 'freedom from duties'. 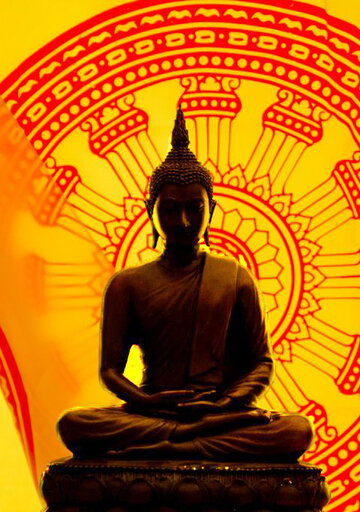