Being buffeted by wild winter winds is expectable at this time of year if you live in Northumberland. Storm Desmond however was a bit out of the ordinary. Thankfully the gusts that battered Harnham Hill last week eventually passed by without causing any significant damage. They did cause Ajahn Abhinando's train from Scotland to be turned around so he didn't arrive as planned, but he got back eventually. Tan Gambhiro's plane took off as scheduled on Sunday so he is now back in Sumedharama, Portugal. On Sunday evening Luang Por Munindo offered a Dhamma talk called 'Utterly Frustrating Teachings' which considered how challenges can deepen understanding. Ajahn Sukhacitto will travel back down South today, Wednesday, planning to arrive at Cittaviveka Monastery in time for the Winter Retreat; on the way visiting his ageing mother in Germany. Tomorrow, Thursday 10th December, will be a New Moon day. Reports from India indicate the pilgrimage proceeds well. After Vultures Peak the group spent two days at Savathi before taking the long drive on to Lumbini. We look forward very much to seeing Yom Mame back again mid-January and Ajahn Punnyo by the end of April. 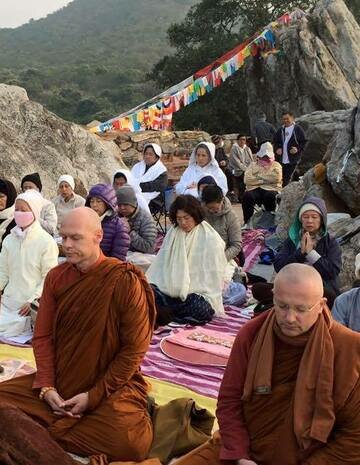