That Was Winter Retreat 2016

The New Moon this month falls today, Wednesday 6th April, and our Winter Retreat for 2016 is over. Everyone in our small monastic community who started the retreat has completed it. Sincere gratitude to the many friends and supporters who generously and sensitively offered help over the last three months. Some of the resident Retreat Support Team have already departed, although Andrew has stayed on and last Sunday took up the anagarika training. This was an occasion for Luang Por Munindo to give a Dhamma talk on Understanding Leads to Peace . Within the wider community of residents on Harnham Hill, things have been somewhat less settled.  One elderly neighbour recently passed away and another entered a care facility in town. Others have suffered illness and another household decided to sell up and move away. Ajahn Chandapalo, abbot of our monastery in Italy, has recently been visiting his mother in York, which gave us the opportunity to introduce him to the two new Samaneras, Jayamangalo and Jinavaro. Samanera Jayamangalo previously lived with Ajahn Chandapalo at Santacittarama for over 5 years. This next Saturday, 9th April, should see the Harnham Buddhist Monastery Trustees all here for the first HBMT meeting of 2016. Then on Sunday 17th we will observe the traditional South Asian New Year festival (Songkran in Thai), involving bathing the Buddha rupa and a forgiveness ceremony. Gavin is due back in May to take up Kitchen Manager duties, with Anthony's year ending this month. 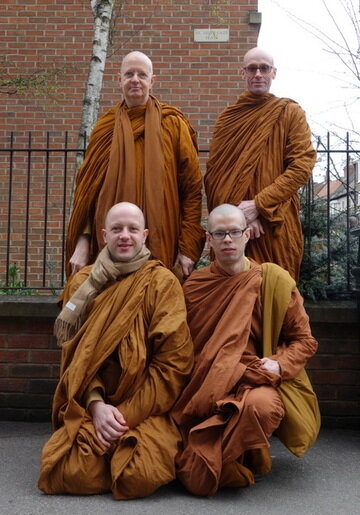