On Friday 16th January we marked the anniversary of the passing away of our teacher, Venerable Ajahn Chah, with a special puja. Everyone who attended had a chance to participate, making offerings of candles, flowers and incense beautifully prepared by Yom Mame. Luang Por Munindo offered a reflection on The Sensitivity of a Spiritual Warrior.  Three members of our Retreat Support Team, Giovanni, Martin and Tjerry, have made a commitment to long-term training and are expected to take anagarika precepts in April. Another of the Support Team, Anthony-from-Newcastle, has asked for the job of monastery Kitchen Manager, similarly planning to begin in April. As with most of Britain, we have been periodically battered with strong winds (but thankfully only a little snow). The heating in the kutis stopped working for a while, but it turned out the person operating them had pushed the wrong button. It happens. Our internet connection was down for several days. BT said, 'It is not a precise science'. Neither outage significantly disturbed retreat mood. Ian Donaldson has arrived to serve in the kitchen for 6 weeks. At the beginning of February the gas ran out (second time in 6 weeks). Eventually we received a refill, but the operator left an important valve open requiring a further visit from Technical Support. It happens. Perhaps Penny will change the supplier when she returns from holidays. Thank goodness for the generous store of firewood. On Sunday 1st February at puja (in the old shrine-room with a fire on) Luang Por spoke about Sorting the Bullies. Each month we observe one week of silence and for February it will be from 9th - 15th. 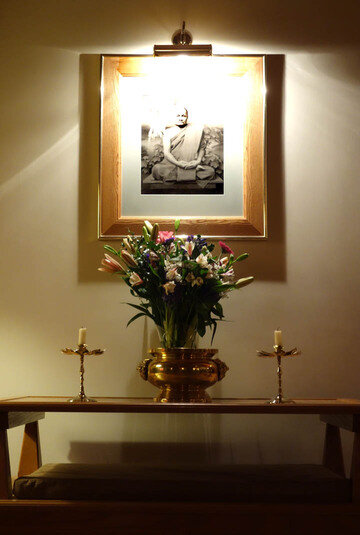